Stages Of The Cardiac Cycle

Cardiac cycle may be defined as the series of events which include mechanical, electrical, pressure-volumetric changes that occurs in the heart from the beginning of heartbeat to the next. The cardiac cycle can be divided into 2 phases:

The duration of the whole cardiac cycle is 0.08secs.

During the contractile phase, blood ejected from the heart, while during the relaxation phase, the chambers of the heart gets filled with blood. 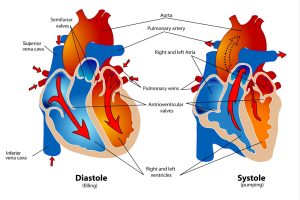 Stages of the Cardiac Cycle

During late atrial diastole and early ventricular diastole, blood rushes freely into the heart chambers and this accounts for about 80% of ventricular filling.

At this point, the arterio-ventricular valves( bicuspid and tricuspid valves) are opened and the pressure in the ventricles begin to increase as the chamber become filled with blood.

The spontaneous generation of action potential form SA nodal tissues causes the spread of impulses through the atrial muscles causing them to contract. This contraction begins the atrial systolic period.

Atrial systole pumps the remaining 20% of blood into the ventricles before the ventricles contract. When the ventricles are fully filled with blood, the pressure within the chambers of the ventricles exceeds the atrial chambers. This produces the first heart sound which is the characteristic ‘LUB’ sound heard with the aid of stethoscope.

At this junction, the isovolumetric contraction phase begins and the volume of blood in the ventricle when it is fully filled with blood at the end of ventricular diastole is known as end diastolic volume. 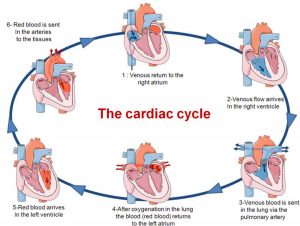 The ventricular systole begins during isovolumetric contraction phase and the ventricular ejection occurs simultaneously with artrial diastole. The ejection of blood from the heart is initiating rapid due to pressing build up and the initial inertia of blood flow. This however slows down as the pressure within the ventricles begins to fall. When the decline in pressure in the ventricles fall below that in the aortic and pulmonary trunk, the semilunar valves close in order prevent the backflow of blood. This produces the second heart sound which is the characteristic ‘DUB’ sound heard with the aid of a stethoscope,

The dicortic notch is a brief rise in aortic pressure caused by the backflow of blood rebounding to the semilunar valves.

The volume of blood left in the ventricle at the end of ventricular systole is referred to as end systolic volume.

Stroke volume is the volume of blood pump out of each ventricle per beta. It is a difference between the end diastolic volume and end systolic volume

At the end of ventricular systole, isovolumetric ventricular relaxation period begin and pressure within the ventricle begin to drop,.

When the drop in pressure is lower than that in the artrial the AV valves open and blood begins to enter or slow. This begins the ventricular diastole which coincide with midway into artial diastol

About the author Marianna

Marianna Austin is a graduate of medicine from the University of Illinois. She has 10 years of experience in the field of medicine and healthcare. She is currently the lead writer for Heimlich Institute.